The Town of Ramapo will be hosting a film festival running from April through December at the Town of Ramapo Senior Citizens Center in Suffern. The first film, Knives Out, will be shown on April 14th. All films will show at 11 am on Wednesdays and admission is free to all town residents, but reservations must be made at least one week prior to the movie date due to limited … END_OF_DOCUMENT_TOKEN_TO_BE_REPLACED 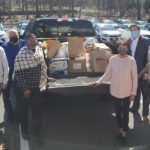 The Town of Ramapo extends thanks to the generous residents for their donations to the displaced residents of Evergreen Court For Adults. Town employees worked with Assemblyman Lawler's office to fill a pickup truck with clothing and other necessities. Supervisor Michael B. Specht joined together with elected officials from throughout Rockland County to collect clothes … END_OF_DOCUMENT_TOKEN_TO_BE_REPLACED 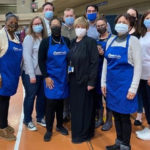 Ramapo Town Supervisor Michael B. Specht and Town of Ramapo staff were proud to volunteer at the opening of the mass vaccination site at Rockland Community College (RCC). … END_OF_DOCUMENT_TOKEN_TO_BE_REPLACED