New City is a hamlet and census-designated place in the town of Clarkstown, Rockland County, New York, United States, part of the New York Metropolitan Area. An affluent suburb of New York City, the hamlet is located 18 miles (29 km) north of the city at its closest point, Riverdale, Bronx. Within Rockland County, New City is located north of Bardonia, northeast of Nanuet, east of New Square and New Hempstead, south of Garnerville and Haverstraw village, and west, straight across Lake DeForest, of Congers. New City's population was 33,559 at the 2010 census,[1] making it the 14th most populous CDP/hamlet in the state of New York.[2]

New City is the county seat, and most populous community of Rockland County[3] and the location of the Clarkstown Police Department, Sheriff's office and corrections facility. The downtown area is one of the main business districts in the county. The ZIP code of New City is 10956. 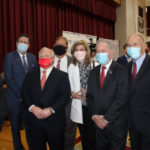 New City, NY, – County Executive Ed Day and the Division of Environmental Resources presented the 24th County Executive’s Outstanding Environmental Volunteer Award to Nanuet resident Gale Pisha during a ceremony at Kennedy Dells County Park in New City. “While we have faced many challenges this year, one of the unexpected benefits of our situation is that many more … END_OF_DOCUMENT_TOKEN_TO_BE_REPLACED

The Town Board of the Town of Clarkstown will meet on Tuesday, March 23rd at 7pm in Room 301 at Town Hall. … END_OF_DOCUMENT_TOKEN_TO_BE_REPLACED

The Town Board of the Town of Clarkstown will meet on Tuesday, March 9th at 7pm in Room 301 at Town Hall. … END_OF_DOCUMENT_TOKEN_TO_BE_REPLACED

The Zoning Board of Appeals (ZBA) of the Town of Clarkstown will meet Monday, March 8th from 7 to 9 pm in the Auditorium. … END_OF_DOCUMENT_TOKEN_TO_BE_REPLACED